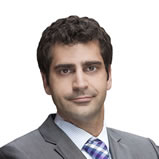 Sahm Adrangi is the Founder and Chief Investment Officer of Kerrisdale Capital Management.  He has been involved in all aspects of the firm’s development since its founding in 2009. Mr. Adrangi launched the company with under $1 million and the firm currently manages approximately $750 million as of April 2021.

Best known for short selling and publishing research, Mr. Adrangi shares his firm’s views on stocks, such as under-followed longs and overhyped shorts, that are misunderstood by the market. Kerrisdale’s research seeks to correct broadly held misconceptions about these companies’ fundamental business prospects. Kerrisdale shares its research on its website, third-party investing-related sites, and on Twitter.

Mr. Adrangi first made a name for himself shorting and exposing fraudulent Chinese companies, including China Marine Food Group, China-Biotics, Lihua International and many others in 2010 and 2011. Several of Mr. Adrangi’s targets, such as China Education Alliance and ChinaCast Education Corp, became subject to enforcement actions from the Securities and Exchange Commission.

While Kerrisdale shares research on a wide variety of companies and industries, in recent years Mr. Adrangi has focused the firm’s efforts on several specific sectors where Kerrisdale has developed expertise. The biotechnology sector has been one area of focus, and Kerrisdale has published research on development stage companies including Bavarian Nordic, Sage Therapeutics, Zafgen, Unilife, Pulse Biosciences and numerous others. The mining sector has been another area of focus, and Adrangi has called into question the mining prospects and market valuations of First Majestic Silver, Northern Dynasty Minerals and other resources companies. Finally, Kerrisdale has published numerous reports on the telecommunications sector, sharing skeptical views on Globalstar, Dish Network, Straight Path Communications and ViaSat Inc. In late 2014, he exposed weaknesses in Globalstar’s proposed Terrestrial Low Power Service (TLPS) in a live presentation and webcast, followed by a series of articles, ex parte letters filed with the FCC, and a meeting with the FCC.

In addition to publishing research, Mr. Adrangi has taken an activist role in several investments. In 2013 he engaged with Lindsay Corporation management to optimize the company’s cash deployment and capital allocation policies. The following year, Mr. Adrangi led a proxy contest to replace the directors of Morgans Hotel Group with two directors from his slate elected in 2014.