Following our report on Sage Therapeutics, six sell-side reports were published defending Sage Therapeutics and insisting that the price decline following our initial report represented a buying opportunity for the discerning investor.  The points made in each report were similar, and we believe the two key points worth discussing are the placebo response rate assumption and the scientific rationale for using SAGE-547.

Given that SAGE-547 for SRSE accounts for ~80%-100% of sell-side analyst valuations and will generate no revenues if it fails its current Phase 3 trial, the key point of debate is what the placebo response rate will be in the Phase 3 trial for SRSE.  We are confident that it will be far higher than the 35% claimed by Sage management and repeated by sell-side analysts, and in this follow-up we will show the source of the 35% assumption and why it is wrong.  The paper Sage cites in justifying its assumed 35% rate actually produces an overall response rate of 74%!

We will also use this follow-up to point out that the scientific part of our thesis (that SAGE-547 confers no benefit to patients) has not received any counterarguments worth discussing.  To recap, there is a strong argument against SAGE-547 demonstrating any benefit compared with placebo:

Rather than address these points, sell-side analysts continue to repeat Sage management’s message that SAGE-547 affects extrasynaptic receptors rather than just the synaptic receptors that first-line benzodiazepines target; SAGE-547 targets them better than other drugs that target them; and SAGE-547 is destined to achieve positive results in Phase 3 because the response rate in Sage’s post-hoc evaluable treatment group was 77% and the control group response rate will be approximately 35% in the Phase 3 trial.  In reality, the response rate in the intent-to-treat group was 68%, and both of these are within the range we expect to see from the placebo group in SAGE-547’s Phase 3 trial based on data from the large studies we presented in our initial report.

Ultimately, success or failure in Sage’s Phase 3 trial comes down to what the wean rate in the control group is.  We summarize the sell-side counterview to our thesis on standard anesthetic wean rates below:

The actual response rate for placebo in Sage’s ongoing STATUS trial will be ~35%, not 60-77% as Kerrisdale claims.  This was shown in Rossetti et al 2011.  Rossetti et al 2011 provides an apples-to-apples comparison, while Kerrisdale’s citations provide an apples-to-oranges comparison by including patients who were not super-refractory and looking at cumulative wean rates.  Further, the studies cited by Kerrisdale are measuring for initial control (burst suppression) rather than successfully weaning from anesthetic.

All of these points are wrong.

The studies we cited in our report (Ferlisi et al 2015 and Shorvon & Ferlisi 2012) provide, by far, the best data available for predicting the placebo response rate in Sage’s current STATUS trial.  The outcome sample sizes are far larger than anything else available for RSE and SRSE patients.  The two papers are as close to apples-to-apples as you can get for this kind of study with a meaningful patient population.  We consider the comparison to be more like Fuji-to-Granny Smith than apples-to-oranges, and it is foolish to ignore data simply because it is imperfect and does not support one’s initial investment thesis.

It is true that the studies include patients who were able to resolve status epilepticus in the refractory rather than super-refractory stage.  However, as we pointed out:

It is also true that these studies look at overall success rates rather than success rates from a single wean.  We believe this is the appropriate benchmark for the placebo group in Sage’s Phase 3 trial for two reasons:

Analysts assuming a 35% control group success rate are likely getting it straight from Sage management, who is sourcing it by selectively looking at data provided in Rossetti et al 2011.  Rossetti et al 2011 is a trial that was intended to include 150 patients but could only recruit 24 over the course of three years (one of whom spontaneously recovered before being administered anesthetic and was not included in the results).  Below is a summary of the outcome data the study provided:

The overall initial wean success rate at the top-right of the above table (circled) is what Sage uses to justify its 35% placebo response rate assumption in the ongoing Phase 3 trial.  However, this rate is extremely misleading because it does not represent a comparable patient population to Sage’s Phase 3 trial.  In the table above, we adjust to exclude patients who were counted as failures because they failed to achieve burst suppression on the pre-selected doses of anesthetic (patients failing to achieve initial burst suppression would certainly be excluded from Sage’s trial), and then we exclude a patient who was counted as a failure because of propofol infusion syndrome (which forced the trial investigator to take the patient off of propofol and therefore count the patient as a failure since the primary goal of the study was to determine the successful treatment rate for patients on fixed-dose propofol compared with patients on other barbiturates).  After adjusting for those seven patients, we get to a success rate of 50%.

However, this is still not an appropriate comparison with Sage’s trial design because the Sage trial is over a seven-day period while in Rossetti et al, patients were weaned off after 1.5-2 days:

Indeed, we see in the table of outcome data that the average patient was only on study drug for a median of 2.5 days for propofol and 2 days for barbiturates: 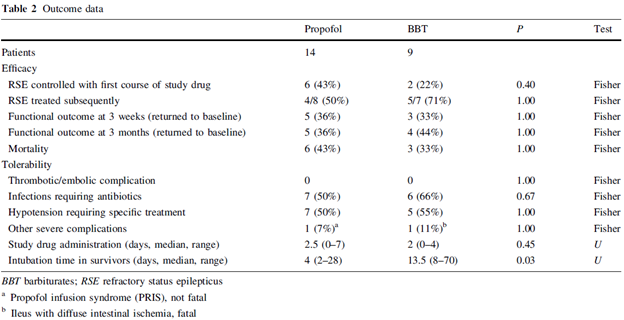 As we’ve said before, by structuring its Phase 3 trial with six days of treatment, Sage is giving itself multiple bites of the apple by giving physicians time for multiple wean attempts.  In our discussions with a principal investigator on the trial, he characterized the wean process as “iterative”, with the trial providing time for multiple attempts to remove the patients from anesthetic and SAGE-547.  Because of the multiple wean attempts permitted during Sage’s trial as well as the inherent patient selection, it is more appropriate to estimate the placebo response rate based off the overall success rate in publications such as Rossetti et al 2011.  The overall response rate (74%) falls well within the range we previously guided to and is above the 68% intent-to-treat group success rate Sage saw in the Phase 1/2 trial.

If instead, we look exclusively at the patients who were refractory to the initial wean attempt (and therefore would be super-refractory status epilepticus patients), we see a recovery rate of 4/8 (50%) in the propofol group and 5/7 (71%) in the barbiturates group, for an overall success rate of 60%.  This is also very close to the 68% wean rate Sage saw in its ITT group in its Phase 1/2 trial and not even close to what Sage needs in order to achieve statistical significance.

We find it entertaining that the same analysts who claim that the papers we cite are misleading because they include some RSE patients rather than exclusively SRSE patients are instead relying on Sage’s 35% estimate, which comes from a paper representing a tiny, 23-patient sliver of the Shorvon & Ferlisi 2012 meta-analysis that is exclusively RSE patients, and then ignore the full results.

The counterpoint that the numbers from the studies we cited measure initial control rather than ability to wean is completely wrong with no room for creative interpretation.  “Control” refers to successful cessation of seizures without anesthetic—any practitioner with experience with status epilepticus patients will tell you that control is virtually always achieved.  Shorvon & Ferlisi 2012 explicitly says this:

All anaesthetic drugs, if used in high enough doses, will result in a depth of anaesthesia sufficient to abolish seizure activity. In this sense, any effective anaesthetic will inevitably initially control status epilepticus, provided a sufficient dose can be given.

This is also clearly communicated in the tables from the papers we cite.  Below we have again reproduced the table from Shorvon & Ferlisi 2012:

The different outcomes all add up to 100%.  For a patient to have breakthrough seizures or withdrawal seizures, they must have first achieved initial burst suppression with anesthetic.  The fact that there is no overlap between the patient outcomes tells you that “control” refers to the final outcome, not to simply getting the patient to an adequate state of burst suppression.

In Ferlisi 2015, there should be no confusion because Ferlisi explicitly refers to outcomes as either “recovered” or “not recovered”.  Ferlisi writes:

We were able to classify 413 patients into these three categories, while for 75 patients, the final outcome of the status epilepticus was considered missing because of the lack of sufficient data: 304 patients recovered from status epilepticus (74%), 93 patients died (22%), and 16 patients had the therapy actively withdrawn (4%).

This is broken out by drug in Figure 4 on p. 5.  We have reproduced the data below in an easier-to-read format:

The sell-side analyst focuses on the 36 patient group who did not receive midazolam until ≥24 hours after they started seizing, with the assumption that patients were not super-refractory until ≥24 hours.  While this may seem logical at first glance, this is the wrong way to interpret the study results.  We see in Hayashi’s discussion of treatment duration that, like the papers we cited in our initial report, the average overall patient in Hayashi 2007 is super-refractory (despite only 10% of the overall patients being in the ≥24 hour subgroup):

The “hours” used to stratify patients measure the duration until the patient was given midazolam—not the duration of time the patient was under anesthesia!  Focusing on the ≥24 hour subgroup is cherry-picking the group with the lowest response rate to support a predetermined thesis.  The average patient on midazolam infusion was under midazolam for approximately 5 days.  However, not all patients received midazolam infusion (some only received a bolus dose)—so the best way to get an apples-to-apples response rate is to look at the response rate for patients who received an infusion of midazolam since patients who only received a bolus dose were not being anesthetized with midazolam.  The patient path tree diagram (copied below) shows that 306 patients (134+83+17+72) received infusions and 203 of those patients (119+47+2+35) were effectively treated, revealing a success rate of 66.3% for patients who underwent anesthesia:

So that there is no confusion on what “effective treatment” means in Hayashi et al 2007, the authors explicitly specified that patients were only considered to be “effectively treated” if seizures disappeared for at least 24 hours after discontinuation of midazolam:

Only in cases showing complete seizure disappearance (for at least 24 hours after discontinuation of midazolam) was the treatment rated effective.

The effectiveness of midazolam in patients with epilepsy who are administered midazolam at ≥24 hours is particularly bad, skewing the results for that subgroup.  The paper’s authors discuss this (emphasis added):

We can see from the table that the epileptic patients in the ≥24 hour subgroup are a massive outlier at 15% compared with 56% (9/16) for the rest of the patient population.  While we can speculate on the cause, it is clear that the response rates in this particular subset of patients is an outlier.  The data from the ≥24 hour subgroup does not mesh with any other subgroups from this study nor does it mesh with wean rates found in other studies where midazolam or other anesthetic agents were used for treating SRSE.  The authors acknowledge in the paper that the overall efficacy rate in other studies for midazolam is in the 75% – 100% range:

In the present study, effective ratio was 64.5%, which is lower than the 75-100% reported in the literature.

We continue to maintain high conviction in our thesis and believe that Sage will fail its ongoing Phase 3 trial for SAGE-547.